HUGE thanks to those of you who took time to share your vision for the future of Cape Girardeau via the project Quick Poll and City’s Facebook Page! We heard from 70+ people who gave thoughtful ideas on a variety of topics. An overview of participants, responses and themes are provided below.

What one word would you use to describe Cape Girardeau today?

What one word would you use to describe Cape Girardeau as you would like it to be in 2040?

Thank you again to everyone who has participated! 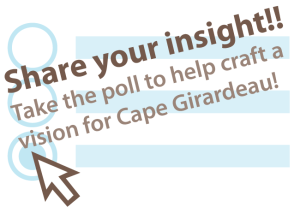